Saturday’s Fantastic Fifty production sale of Southdowns from the Chaileybrook and Brant flocks of Jonathan Long and Sid Cook, respectively, saw a Chaileybrook ewe lamb take the top call at 880gns and set a new breed centre record for a ewe lamb in the process.

This lamb, Chaileybrook 20/00697, is by the flock’s most recent French import sire Dartagnan and out of a dam which is a granddaughter of the 1050gns record priced ewe lamb Chaileybrook 14/0021 and from the same family as the 2500gns female record holder Chaileybrook 16/00018. Buying this stand out lamb was J C Burdge, Harptree, Bristol. 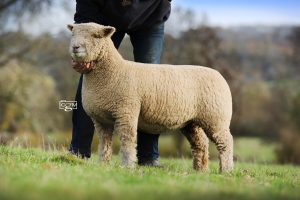 Next best at 720gns was a one-crop ewe, Chaileybrook 18/00303, a daughter of the multi-award-winning Percheron out of a Sarkozy daughter, Chaileybrook 15/0010, herself a multiple breed champion. From the flock’s best family and carrying twins to Dartagnan, she was bought by the Robinson family, Church Stretton, Shropshire. 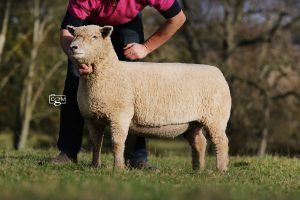 A trio then traded at 650gns, with the first of these being a one-crop ewe from the Brant flock, Brant 18/00530. This one is again by Percheron and out of a Sarkozy daughter and sold carrying a single to Dartagnan. She again joined the Robinson family’s trailer home.

Second at this money was the first of the Chaileybrook gimmers, Chaileybrook 19/00577. Again, by Percheron, she is out of a daughter of TC4028 ‘The Frog’ again from the best family in the flock and sold in-lamb to Dartagnan. Buying this one were the Trumper family, Abergavenny. 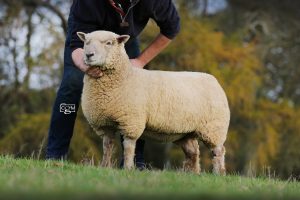 The other to take a 650gns call was another of the Chaileybrook gimmers, Chaileybrook 19/00586. Sired by Ibanez, she is out of a Sarkozy daughter which is also dam of retained stock sire Beaujolais and sold in-lamb to Breton. Taking this one home was Emily Yates, Litchfield, Staffordshire. 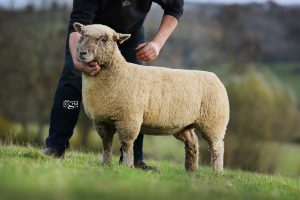 Close behind at 600gns was another gimmer, Chaileybrook 19/00557, a daughter of the homebred sire Tadpole and out of a dam by Sarkozy. She sold carrying triplets to Ibanez and was bought by Nick Page, Chichester, West Sussex. 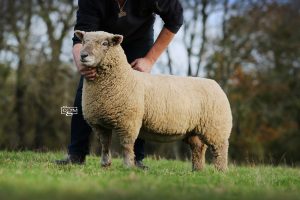 Then at 590gns was Chaileybrook 14/00045. Sired by The Frog, this five-crop ewe is out of the noted Chaileybrook 05/0002, dam of both former male and female breed record holders. This ewe is dam to the first 650gns gimmer and sold carrying to Beaujolais. She was bought by Howard Wood, Pontypool.

Two then sold at 550gns, with the first of these being a one crop ewe, Chaileybrook 18/00317. This Percheron daughter is out of a Sarkozy daughter from the same family as the breed female record holder and sold to previous buyer J C Burdge.

The next at this price was one-crop ewe Chaileybrook 18/00304, a Percheron daughter out of a dam by The Frog which is a full sister to the 590gns ewe from earlier in the sale. Carrying twins to Dartagnan, she sold to Howard Wood.

Close behind at 480gns was a three-crop ewe from the Brant offering, Brant 16/00342. She’s by Sarkozy and sold carrying twins to Dartagnan when bought by bulk buyer J C Burdge.

And making 450gns was a recipient carrying an embryo from Chaileybrook. This embryo, sired by Percheron is out of a dam by Sarkozy which is also dam of the retained sire Beaujolais.